Gabriele, the genius that can transform ’50’s jewels’ into e-bikes

By Sara Gandolfi: on motori.corriere.it

From the Guzzino to the Aquilotto, a series of absolutely unique vintage e-bikes. With the chance of being customised to the client’s liking.

Gabriele Ranzini has been a metalworker all his life. Milling cutters, bolts and machineries are in his DNA. Just like bicycles, as a matter of fact. At six years old he was always in his father’s way, an agricultural mechanic that used to repair two-wheels on the side. ‘At 14 I was already by his side, fixing bikes and motorbikes -he recalls- . 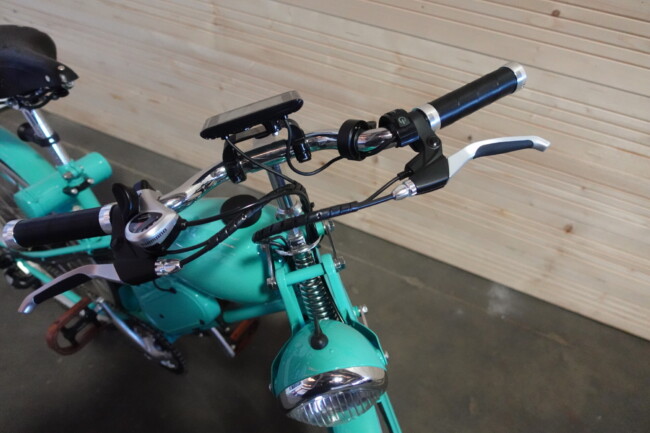 Gabriele Ranzini has been a metalworker all his life. Milling cutters, bolts and machineries are in his DNA. Just like bicycles, as a matter of fact. At six years old he was always in his father’s way, an agricultural mechanic that used to repair two-wheels on the side. ‘At 14 I was already by his side, fixing bikes and motorbikes -he recalls- .

I never had a flair for studying, as soon as I could I’d go get my hands dirty with him’. At 23 years old he takes over the garage where he had been hired, he starts working on his on own as sub-contractor in this big warehouse in Albairate’s rural surrounding.

“Carpentry, milling and turning, with industrial parts weighing up to 4 tons. Let me tell you it is no slight matter.

However he can not shake off the memory of those rustic two-wheels from his youth, often renewed after they had been forgotten for too long in basements or barns, here in Milan’s hinterland. So that summer, recovering from a stroke that hit him all of a sudden, he decides to launch into a new venture.

Gabrielle, the mechanic-renovator, got back in the game when he bought an Aquilotto Bianchi from a friend, the motorcycle built in the historical Edoardo Bianchi factory in 1953.

At the time, being on trend, it cost 70,000 liras, it featured a 45cm3 micro engine which, according to the commercial, ‘gets rid of the driver’s muscular strain’.

With a litre of 5% fuel mixture it could travel over 80 km. An engine that today is illegal. Ranzini removes it and replaces it with an electrical battery,

He renews with painstaking care all the mechanical parts, he preserves the original bronze welding, he restores the chrome plating, he adds a few stylish parts such as the oakwood battery cover, he paints again the frame with it original colour palette (Nile green and ivory white) and here are the historical pedal assisted bicycles renewed according to the XXI century standards. That is to say: the 50’s on the road with zero emission: he calls them RG and starts numbering them, just like unique pieces.

To this day Ranzini has renewed and re-invented four Bianchi Aquilottos, one Guzzi 65 or ‘Guzzino’, one Moschito Garelli, one Paperino Garelli and he is working on a Motom. ‘I modify the frame in order to install the new components, like the electrical engine placed in the original fuel tank, and I try to keep them as light as possible, not above 28kg’. One of a kind e-bikes. The Guzzino still features the plate of the dealer where it was purchased nearly eighty years ago.

They are authentic pieces of Italian history, yet equipped with the most modern Samsung batteries from 36V and 14-20 Amp (provided by Femak srl) as well as niche and luxury components such as Brooks seats, the Shimano or Campagnolo gear, the maxi-wheels and the led lights handcrafted by Ranzini himself. ‘And all the screws are in stainless steel alloy AISI 316, the one that is used for ships, because they absolutely must not get rusty’ the inventor explains. Behind each bike, he stresses, there are at least 90 working hours in a garage. 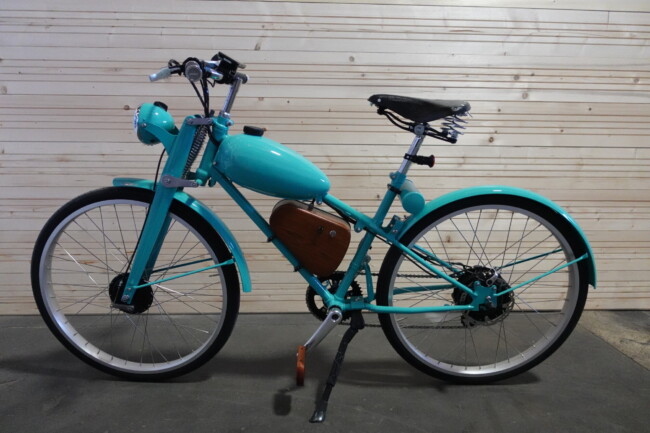 Albairate’s RG e-bikes (by the way one of the most recycle-friendly districts in Italy) have about 90 km range, with 5-6 hours charring time. The maximum self-reduced speed is 25km per hour. Upon road testing they turn out to be light and reactive, with a soft entry pedal assistance that can be adjusted to several levels. The former Aquilottos are way more comfortable whereas the former Guzzino, surely more swanky, requires a slightly inclined posture, motorbike like. The only sour spot is the price, which is in line with the product’s craftsmanship though, it starts at 7,200 euros.

On the site www.rg-bibitalia.it soon you will be able to admire the first renewed bicycles, with the chance of requesting customisations and renovations to taste. A treat for environment conscious wealthy people, that can cycle of course, but with a little help, and can now show off their antiques with cutting edge technology on the road.